Sailboat Racing Spectacle Begins July 27 Near The Statue of Liberty 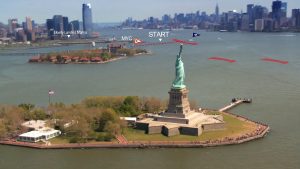 For Immediate Release – With Lady Liberty in the background the 2017 Around Long Island Regatta (ALIR), sailboat race, begins July 27, 2017, at 2 P.M.

To make the start visible to more spectators, the Sea Cliff Yacht Club has for the first time in the 41 year history of this celebrated race moved to New York Harbor. It can now be viewed from both lower Manhattan and Jersey City.

Since its inception in 1977, the ALIR had started a few miles east of the entrance to New York Harbor, far from spectators’ ability to see the start. Now the ALIR will have a starting location capable of welcoming spectators and giving the media unprecedented access to coverage. Regatta Chairmen Jim Aikman and Doug Wefer are extremely pleased about this new venue. “The start is such a great opportunity to show off the excitement of a race. In the past, we were so far offshore that no one knew where we were.”

Lower Manhattan, Jersey City, and Brooklyn will be able to see the start of the 41st ALIR,” says Aikman. Wefer says, “Frank Braynard, one of the creators of the South Street Seaport and the Bicentennial Tall Ships celebration in 1976, brought the idea for an Around Long Island Regatta to Sea Cliff Yacht Club and the event was born. Now, could there be any more amazing backdrop for the start of a sailboat race, in the shadows of the Freedom Tower, the Statue of Liberty and the Manhattan and Jersey City skylines?”

To support the move to New York Harbor, the Liberty Landing Marina in Jersey City will serve as a venue for overnight sailboat dockage prior to the start. Jason Dalli, General Manager at Liberty Landing Marina, loved the idea. Mr. Dalli said, “We have always had competitors stopover on the way to the start of the ALIR. We are delighted to have the start in New York Harbor and to be a more integral part of the event.”

The starting sequence for the First Division of the 2017 ALIR will begin at 2:00 PM on July 27th. Subsequent divisions will start at ten-minute intervals. Private boats, charters, passing ferries and shore spectators can view each start, as the competitor’s jockey for position.

THANK YOU TO OUR HOSTS