Reserve early for these popular events:

Trim the Tree: This Friday December 4th please call the office to reserve your spots

We will be serving our Friday night menu, decorating the tree, singing a few holiday songs, all socially distant of course. Come on down in fine voice and join the caroling and hang an ornament on the tree. Dinner service will start at 6 pm with music from 7 to 11.

Ninth Annual Family Gingerbread House Building Class. Bring the family and decorate a house to bring home as the perfect holiday decoration. The class will be held from 1pm to 3pm in the main dining room. Each family will get a gingerbread house, learn how to decorate it, and have some cookies, cocoa and great fun. Learn how easy it is to make your own gingerbread house. You will get a preassembled house and all the fixings for you and the kids to make a beautiful centerpiece for the holiday table.  The cost is $25.00 per family with additional houses available for $15.00 each, if you feel the need to build a village. Please reserve early so we have an idea of the number of houses we need.

Santa will be here from 12pm to 3 you will be instructed when to visit him in the Regatta Room to keep proper social distancing and for a chance for everyone to get their one and one time with this special guest!

Due to capacity limits and social distancing requirements reservations are requested for all dining and events to ensure we can accommodate all members responsibly. 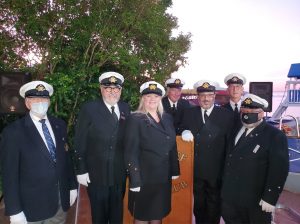 Over its 128-year history, the Sea Cliff Yacht Club has seen a multitude of changes, from its membership to its programming to its community service projects. One of its constants, however, has been male leadership. That changed last Saturday when Robin Maynard was named the club’s first female commodore.

“It really, truly is an honor, and it was important to me also to be a role model,” Maynard said. “Boating is a male-driven sport, and it’s nice to push female boaters and female sailors [forward].”

Maynard, 48, said she has been a member of the club for 12 years, and has sat on its board in various capacities for the past decade. Although she grew up relatively far from the water, in West Orange, N.J., she said she has always been drawn to the ocean. Sea Cliff’s proximity to the water, she said, and her love of its Victorian architecture were what brought her to the village in 2000. Whether she is out on one of her three sailboats, her powerboat or her scull, she said, she feels at home on the water.

“Being on the water is just a special thing,” Maynard said. “It’s very relaxing. There’s no better view than sunset at the Sea Cliff Yacht Club.”

Although she began sailing several years before joining the club, Maynard said she became a member when her daughter, Samantha, was 2 because she wanted her to get involved in boating early. Samantha, now 15, rows competitively at the private Kent School in Connecticut.

Bringing rowing to the yacht club is one of Maynard’s goals. She also wants to improve the club’s beach area with new furniture, she said, and update its dining room.

While the coronavirus pandemic has made things difficult for the club and its 175 members, Maynard said it is very proactive in its health regulations. A committee of doctors has put a number of procedures in place, she said, including temperature checks, distancing of tables, thorough cleaning and limiting capacity, and a tent equipped with heaters will augment club capacity as the weather gets colder.

Harvey Bass, a member for 34 years who served as commodore from 2012 to 2014, said that Maynard has shown her dedication over the years as a board member. She has a strong operational background, Bass said, having served on a number of committees, and has even made financial contributions. Her ascension to commodore is a milestone, he said.

Maynard is a no-nonsense person who gets things done, Bass said, and is very inventive when it comes to creating events. For Halloween she created a “trunk-or-treat” event in which members decorated their vehicles and children made their way around the club parking lot collecting treats. She enjoys bringing the club’s families together for all sorts of programs.

“The Sea Cliff Yacht Club is year-round,” Bass said, “so you have to have a person who inspires people to come by the club even on those cold winter days that have nothing to do with sailing.”

Thirty-six-year club member Doug Wefer, who was commodore from 2001 to 2003, said that women have played an important role in the club for years. It’s about time it had female leadership, he said, and Maynard’s devotion and energy make her the perfect choice. While some private yacht clubs are set in their ways, he said, Sea Cliff is more open-minded.

“Considering the role that women play in our club, doing everything, [and] all the volunteerism that there is,” Wefer said, “it’s appropriate that women also lead the club, so it’s great to see.”

Maynard, an attorney at Marchese & Maynard, is the village’s associate judge and served on the village board in 2017 and 2018. “I think the more that you give back and the more that you’re involved in the community, the more fulfilling it is,” she said. “It’s also a good example to set for our children to be active in our community. I try to give back as much as I can.”

Sea Cliff Mayor Edward Lieberman said he has gotten to know Maynard well through her many contributions to the community, and described her as philanthropic and humble, a caring, devoted resident of the village. The yacht club could not have made a better choice for its first female commodore, Lieberman said, noting that her induction punctuated an eventful week in woman’s history, with Sen. Kamala Harris being elected the nation’s first female vice president.

“The year 2020 has now seen a fulfillment of the woman’s movement and the history of women’s suffrage,” Lieberman said, “that in the same week we have a woman vice president of the United States and a woman commodore of the Sea Cliff Yacht Club, both historical and inspiring places of leadership.”

It’s been cold, no doubt about it, but we’re almost half way there. Spring springs in another forty-nine days and we just may make it.
So what’s there to do ‘til then? In addition to all of the winter activities – from frostbite sailing to Tea parties, Trivia to shooting trap – I would add one more suggestion. Join a committee.
General Manager Charlie Walsh does an extraordinary job of keeping our club shipshape, and the staff is uniformly excellent. But there is still a mountain of business that gets done every month by volunteers. We need people who are willing to commit to sharing ideas, writing invitations, fundraising for the ALIR, making telephone calls, bringing in new members, and a host of other duties that all need to get done. These volunteers are the true heart of this Club and we could not operate without them.

Volunteering is the easiest way to make the club your own in a very special way. You will meet new friends and find new strengths in old friends. There’s plenty of scientific evidence for the idea that social interaction is as, or more, important for a long and happy life than either diet or exercise — just the kind of thing that you get from working with a group of committed like-minded volunteers. So call the office, get the names of the committee heads, and get involved. Live forever! Why not? 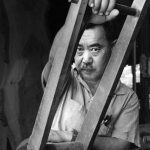 Founding partners Peter Smorto and Robert Melita opened Peter-Roberts Antiques in the heart of SoHo on Labor Day in 1986 and immediately established themselves as leaders in the meteoric resurgence of the American Arts and crafts movement.  Since 2001, Peter has become a leading dealer and expert in mid-Twentieth Century furniture from George Nakashima. 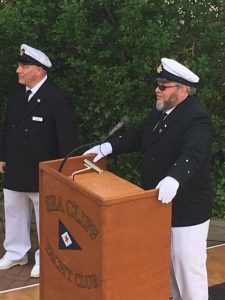 This year the Sea Cliff Yacht Club will celebrate “Change of Seasons” event this Saturday, November 4th marking the end of the summer season and the beginning of the winter season. The Flag Officers and Board of Governors would like to take this opportunity to extend an invitation to you and your family to attend. The gathering is scheduled for 1630 hours (that’s 4:30 for the landlubbers) with the Change of Season Ceremony to begin shortly thereafter. A reception with cocktails and hors-d’oeuvres will immediately follow. Anyone interested in attending may contact the Club office at 671-7374 or use the link below to reserve.

We will waste no time getting frostbite sailing going after Change of Seasons. It will take place every Sunday beginning November 5th weather permitting. Trap shooting starts on Saturdays on November 11th, and this hearty crew shoots no matter what the weather.

Wednesdays through the season, our Pub Menu is available in the Regatta Room. Stop in, play some pool, darts or shuffleboard, and enjoy a good meal and a beverage or two. The bar is open Friday from 3:00 PM and at noon on Saturday and Sunday.

Football season is here; enjoy a game, sip a drink and hang out with friends at your club. Order up some wings and enjoy a Sam Adams Boston Lager special during the games on Sunday.

Autumn is upon us and, once again, it is time to clean out your lockers and take your small boats home. This needs to be done by Change of Seasons, November 4, 2017. Any boats not removed will be considered abandoned and be disposed of or auctioned. There is no winter storage at the club. The racks need to be maintained and the locker room cleaned. Please cooperate and remove your personal items ASAP. Of course, if you are a frostbite sailor your lasers or sunfish may remain on the beach.

Our next Trivia Night is coming up quickly, Nov. 11 at 7:00 PM. Tim Hyland is the November host. Those of you may remember that last time Tim has a passion for the presidency and National Parks. This is not to say he may be going down the same path, as they say, “past performance is not a guarantee of future results”. New player and teams are always welcome.